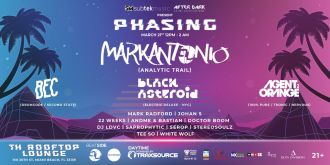 What You Expect? (Original Mix)
King Salomon & Blaze & the Rebel

King Salomon, is a hip-hop artist with the ability to unite older and newer hip-hop fans. Salomon’s music is for the constant grinder, the up-all-night hustler, and the dream-chaser who all find themselves in his immersive lyrical style. Old-school storytelling and lyrical flow meets modern instrumentals and present-day production quality - Salomon’s key to help motivate people into striving for their dreams and for a better life
Born Jon Salomon in Brooklyn and raised in Roselle, New Jersey, Salomon credits influences like Jay-Z, Andre 3000, Lil Wayne and Nas who helped expand his love for hip-hop. Another role model on that list is his mother, who exposed him to live performances at an early age, and inspired him to be on the stage instead of in the audience.
That dream is now a reality for King Salomon, who has performed in Brooklyn, New Jersey, as well as on the SXSW stage in 2018. Raw, unfiltered lyrics, coupled with jazz and RnB influences have cemented Salomon as a household name in New Jersey and surrounding tri-state area. Kickstarting that journey were his first two releases - “Book of Salomon Chapter 1” in February of 2017, followed with “Book of Salomon Chapter 2” in December of 2017. Chapter One was his first collection of songs as an artist, while Chapter Two was a compilation of records written about his progression as a lyricist.
His most recent work, “What You Expect?” was released as a single in late 2018 and is featured on his upcoming project, “The Payne Tape - Side A.” The new album focuses on his journey to success and all of the tragedies and triumphs that occur during his expedition.
Past collaborations include Cruch Calhoun, Blaze the Rebel, and Prophet, as well as producer AxG Productionz, who has worked with Kevin Gates and NBA YoungBoy.
In his own words, “All my music is a reflection of me and my thoughts. I speak about the events that happened in my life, stories from my friends and family, my everyday thoughts and emotions, as well as the grind of living with the purpose of being successful in whatever you do.”
Similar tracks Best tracks Fresh tracks 0 comments